“We are on track to deliver our first Falcon 9 vehicle to Cape Canaveral by the end of 2008,” said Gwynne Shotwell, Vice President of Business Development for SpaceX. “In addition, we’re very pleased to have signed a significant new US government customer for our next Falcon 1 flight, and will be releasing details shortly.”

Target date refers to delivery of the flight vehicle to the launch site. The actual launch date is dependent on a variety of factors, which may include regulatory approvals, launch range scheduling, weather, customer payload readiness and vehicle to launch pad integration.

SpaceX is developing a family of launch vehicles intended to reduce the cost and increase the reliability of both manned and unmanned space transportation, ultimately by a factor of ten. With its Falcon line of launch vehicles, SpaceX is able to offer a light, medium and heavy lift capability, delivering spacecraft into any inclination and altitude, from low Earth orbit to geosynchronous transfer orbit to interplanetary missions.

As winner of the NASA Commercial Orbital Transportation Services (COTS) competition, SpaceX will conduct three flights of its Falcon 9 launch vehicle and Dragon spacecraft for NASA. This will culminate in Dragon berthing with the International Space Station and returning safely to Earth. When the Shuttle retires in 2010, Falcon 9 / Dragon will have the opportunity to replace the Shuttle in providing both up and down transportation services to the Space Station 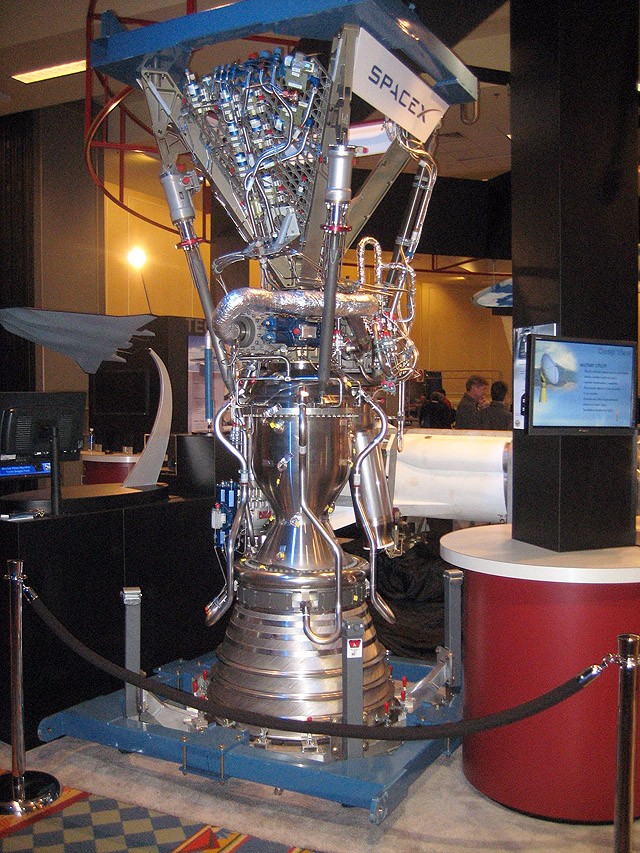 
Details have emerged of the UK's first commercially designed and built manned capsule that was delivered in 2005 to US customer Space Exploration Technologies (SpaceX), but did not fly. SpaceX had planned to launch a production version on its Falcon 5 rocket.

Above: The Magic Dragon capsule before its shipment to SpaceX

Kept secret until now, the five-crew capsule, called Magic Dragon, was designed by UK engineer Andy Elson for a three-day journey to take crew or cargo to the International Space Station and also act as an ISS emergency return vehicle.
Each of the capsule's five seats had a touchscreen laptop computer and supported the body and calf muscles during lift-off, with foot rests designed to fold away after launch. In its cargo version, without seats, it was to have carried three ISS pallet racks.

The interior of the Magic Dragon capsule

Magic Dragon had an ISS common berthing module (CBM) at one end and a combined heatshield/propulsion unit at the other. The propulsion unit's exit cones' rims were to have been flush with the Falcon 5's heat-shield leading edge. The Falcon 5 has now been superseded by SpaceX's Falcon 9 booster.
SpaceX had specified a powered descent that did not use parachutes. The propulsion unit was also to have acted as a launch abort system during a rocket malfunction. The combined heatshield/propulsion unit was wider than the capsule for re-entry aerodynamics and atop this crew module, covering the CBM, was the Falcon 5's foldaway nose cone.
Elson, who has built pressurised capsules for high-altitude balloons, says there was originally a three-man capsule, but SpaceX chief executive Elon Musk decided "in October or September 2004 he wanted a five-person capsule".
The US government's International Traffic in Arms Regulations issues caused difficulties for Elson. He was unable to obtain details of the CBM or even basic Falcon 5 dimensions from SpaceX, a situation complicated by a lack of information about the combined heatshield/propulsion unit Elson was not designing.
SpaceX's next launch of its Falcon 1 rocket with its new Merlin 1C first-stage engine is scheduled for June from the company's central Pacific Marshall islands' Kwajalein Atoll launch site. The payload will be for the US Department of Defense's operationally responsive space office. This third flight of the Falcon 1 was to have taken place earlier this year.