As we already reported, in Moscow today at the Grand Palace State Museum - Reserve Tsaritsyno summit takes place business " A strong Russia - 2010 ". At the ceremonial opening of the summit on behalf of the Federal Space Agency and the employees the space industry meeting participants welcomed the Deputy Head of Federal Space Agency VP Remishevsky .

"The most important condition determining Russia as a modern state - said Victor P. Remishevsky - is to maintain its status of one of the leading space powers of the world and further development of its space capabilities. For the Russian Federation by virtue of its complex federal system , vast areas of settlement and economic activity , targeted integration of space technology and services into economic turnover is becoming more and more important , especially for the implementation of the tasks of modernization of the economy.

Currently, in accordance with the policy framework of the Russian Federation in the field of space activities for the period up to 2020 and Beyond " , which were approved by the President of the Russian Federation, April 24, 2008 begins a new phase of space activity. In the process of its implementation will be achieved : the creation , filling and maintaining the necessary structure orbiting spacecraft groupings to the characteristics of a world-class to provide the required quantity and quality of service navigation, communications , broadcasting and remote sensing . This year, Russia will create a space segment of GLONASS, and we plan to implement in September and December, two more start-up and thus will ensure that a truly global system.

Of no small importance of space technology in the full information support of rescue services and the implementation of other areas of space activities for the socio-economic areas of the country , including the development of space resources for basic scientific research , implementation of the manned space flight - the priority in which belongs to Russia . And all this will be carried out using spacecraft and space means a new type.

This phase is closely linked with the creation of a new Russian cosmodrome . Construction and operation of the "East" , endowed with a special status of national importance , consistent with the priorities approved by the government , and the spaceport will be one of the most important centers of the dynamic development of the Far Eastern region.

Currently, public institutions of Russian society and clearly understand that without a new launch site to talk about an independent space of Russia , its equal participation in international space projects of the future is not possible. In addition to the factors that are formed through the creation of Spaceport conditions for further development of space activities and the positive conditions for the development of the country , international experience suggests the feasibility of launch sites and also to improve sustainability performance and survivability of space infrastructure of the state.

The project creation and further use of the cosmodrome East raised to an entirely new level , the industrial development of the Far East region as a whole and , especially , the Amur region, which is to create an economically strong regional system with adequate capacity of foreign economic activity on the border with China developing and allow the Far East Region act as an equal partner in the interaction with other countries in South - East Asia .

High-tech production, necessary in support of the functioning of modern spaceport will require, on the one hand, the influx of highly skilled professionals, and on the other hand , long-term this megaproject would raise the activity of the local population , the development of science, technology and education, based on the development of the most advanced branches of science and technology .

It is impossible not to draw your attention to another equally important aspect of the problem creating the cosmodrome , which is in its uniqueness as a major innovation project of the Russian Federation .

This is due to the following :

1 . The new cosmodrome in Russia today is first created , and its ideology is based on Russian design and technology in the space sphere , as well as new technology in other areas of the economy. At the same time in modern times, the Russian enterprises and organizations are a good school of international experience in such projects as the " Union of CSG , the establishment of the Korean launch system , " Sea Launch "," Land Launch " . That is , at present there is a unique opportunity to give effect to the cause of the alloy of contemporary experience and new technological and design solutions.

2 . The project is a launch site is a significant range of innovations . That means breeding new generation , and promising a manned spacecraft, and develop new space systems and space infrastructure systems , and to engage in the creative process of regional scientific and technical complexes.

3 . Creating Vostochny is an extremely important nature of the conditions for the formation of national security space activities not only in the broadest sense of the nature of this activity , but also crucial for the country towards a strong Far East.

Already no one left in no doubt that the future of Russia's space activity will be determined by how well we finish this mega-project ", - concluded by the Deputy Head of Federal Space Agency VP Remishevsky .

After the grand opening of the summit , a plenary session entitled : " The state and business: an open dialogue . " In the plenary hall of the Bolshoi in the Tauride Palace under the direction of the Assistant Head of Presidential Administration , Head of the Interdepartmental Working Group on innovative legislation under the Administration of President of Russia EV Popova, hosted a discussion entitled "Strategic planning for regional development - the path to innovation economy . " The discussion was attended by representatives of Federal Space Agency , Director General of Federal State Unitary Enterprise "TsNIIMash " GG Raykunov , Minister of the Amur region on the construction of the cosmodrome " East " KV Chmarov and others .

Tonight Summit business "A strong Russia - 2010 " will complete its work .

Plenipotentiary Ishayev called construction Baikonur East among the prospects in cooperation with France
:: 05.07.2010
RF Presidential Plenipotentiary in the Far Eastern Federal District Viktor Andshaev invited to consider the involvement of France in the project of construction of the cosmodrome in the Amur region East .
"If there is interest, then we can talk and work . With regard to the Far East, then we have a lot of topics for joint cooperation, among others - is the construction of the cosmodrome in the Amur region. Cooperation between Russia and France depends on many instruments - from space exploration to its joint development ", - said V. Ishaev during a meeting with French Ambassador to Russia Jean de Gliniasti Monday .
The Ambassador inquired whether the house any tenders for participation in the construction of the cosmodrome to foreign countries. He noted the political importance of addressing the construction of launch site is on Russian territory. "I was not Baikonur in Kazakhstan , there is the political vulnerability " , - said ambassador.
"I see the prospects for cooperation not only in the construction of the spaceport, but also in transport , logistics , public services , it is in these directions will worky ", - he added.
V. Ishaev noted that the Far East, an active demand products from France. In this regard , he suggested that the French side to locate production in the region.
The official French delegation arrived in Khabarovsk on Monday . The main purpose of the visit - acquaintance with the scientific, technical , trade - economic and cultural potential of the Khabarovsk Krai . The delegation - the heads of major French companies in the field of aviation , logistics , rail transport , banking and engineering .
Construction Program cosmodrome in the Amur region of East approved by the Government of the Russian Federation .
Construction of the East will enable Russia to carry out an independent space policy across the entire spectrum of tasks and keep her status a leading space power.

" The project we will build two parallel start - left and right , in order to always have a reserve " , - said Perminov .

The head of Russian Space Agency said the example of Baikonur , which requires the parallel construction of two launch complexes.

Currently, the load on the " Gagarin Launch " , according to Perminov, the colossal : there always are run and manned Soyuz, and cargo spacecraft "Progress "in connection with the obligations of Federal Space Agency on a permanent stay on the ISS six people. After the decommissioning of U.S. shuttle load of this start to increase substantially .

"So we now use the mandatory 31- th launch pad , and expect that in the future, at least , be able to separate manned and cargo launches. The same is true for the " East ": to ensure the stability of the program would launch two start " - said the head of Russian Space Agency .

However, as noted Perminov , on its infrastructure , type of construction and the inputs spaceport East will be fundamentally different from Baikonur .

"The word" spaceport " conjures even people familiar association with some large areas and facilities , as it is in Baikonur. On the " East " everything will be different: no one is going to spend huge amounts of money and build huge structures - it is not necessary. We have experience in construction in French Guiana at Kourou : a new approach , and such technologies Russia has now ", - concluded the head of Russian Space Agency .

I would like to inform you and tell the good news . Late last night , at night or in fact , one might say , early in the morning , the Government decided to allocate for this purpose to start building a full-scale launch site "Eastern " 24.7 billion rubles for the next three years

There is planned to build a large number of objects . This is the launch pad, and an airfield (bandwidth required ) , and the plant ( you know, that he must make) . In general, this whole complex.

It is important that the new spaceport will service virtually all future space projects , including manned transportation systems , launch vehicles of the new generation and future planetary systems. In addition, construction and operation of the Eastern " have a positive effect on the development of industrial capacities of the Far Eastern region of our country , will significantly increase its investment attractiveness .

Vladimir Putin: So, what are the objects at the launch site "East " to be built ?

Perminov : Since we will be using hydrogen level , it means that the hydrogen plant should be.

Perminov : This is the technique , which is by far the best . Where Russia occupies a leading position , we keep it.

Vladimir Putin : How many people are there, presumably , will it work?

Perminov : We now have extensive experience in South America and South Korea. This year we are completing construction of the spaceport, in part we are concerned, "Soyuz- 2 " in Guyana .

And the finished building , there were two launch in South Korea. In practice the experience and the forces due to your decision to be able to implement - all the best world-class technology - to build a new cosmodrome .

Of course , it would not be a huge number of objects that were previously built in the Soviet Union at the Baikonur Cosmodrome . This is not required . It will be compact, of course, less expensive , less expensive ...

Perminov : Absolutely . Plus, social infrastructure, residential town with all the necessary buildings and facilities.

Vladimir Putin: How much do you think people will be working on construction of these facilities ? And then how many people will run around in the complex ?

Perminov : Based on experience , will run from 5 to 12 thousand people - is directly on the building, and, of course, they will vary depending on the tasks performed. From time to time will be a maximum of 30 thousand people .

Sergei Ivanov : Vladimir Vladimirovich , there is still chose a place very well. Here is the railroad , and this year delivered a grand way to Chita - Khabarovsk, which goes straight past the launch site . And in terms of capital investment in infrastructure , besides the airport , we do not need more traffic . 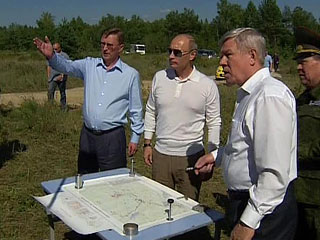